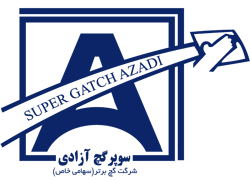 After obtaining Super Chalk in 1372, from 1372 to 1375, with complete and definitive tests and continuous efforts (the inventor of Super chalk azadi Company), in 1376, with a joint stock company with the 1916 registration number and it began its work.
Then to introduce the chalk to consumers, especially professors who were exposed chalk, the chalk in packages of 5 and 10 kg was released. In much of the product was not initially well received, but after a while, when consumers recognized the quality and importance of the chalk, increased the popularity of this product.
After the extent of the work in 1379, more land was purchased in the town hall Shokohieh and loading device special for designed chalk sets were installed. After this step, to prevent environmental pollution due to the softness of this chalk, reverse filtering was installed to the mills, which is also a special feature of this company that no company in Iran has such technology.
In 1383, the company launched another product called the super azadi chalk with a special technology and installation of devices on a low, but ultra-modern ground floor area, which was special in its own field and was released to market.
Since 2010, we are installing a new kiln with the best technology that will deliver Super chalk with best qualify to the market, which will be announced on production. Superior chalk manufacturing company (special joint stock company)
The first producer of Super chalk in Iran, The excellent unit of chalk production in Iran, made from natural gypsum, great payoff with a solidity of three times more than ordinary chalk, micronized, washable, can be used in sepia decoration, sculpture mould, Gypsum and other industrial items.
This manufacturing company has been working seriously since 1372 with the management of Mr. and with the number 2121 and No. 11 from the Ministry of Industry and is currently producing the best kind of chalk in Iran.
Another product of this company is Gypsum Freedom Gypsum, which is special in its kind, due to the formulation and the specific type of gypsum plaster and the provision of gypsum grade of the best gypsum mines in the construction industry due to special adhesion to the concrete and It has been taken into consideration by engineers and building makers.
Particularly in parts that are commonly crafted with simple chalk, this type of chalk can be used. In the decoration of the building, this chalk creates the most beautiful effect for you respectable consumers.
Now, with the research done by the company's executives and specialist staffs, with the acquisition of a new kind of technology, it has taken another step towards improving the quality as well as optimizing fuel consumption, which is hoping to provide the best type of building chalk for consumers.
The chalk obtained from this technology is made with regular and engineered baking, which is very good and soft and makes it easy for the master. As well, due to good and comfortable polishing, the master of work can be beautifully colored like paint and will give you a lasting pleasure for a respectable consumer.